Possums are not cute!

When I was very young my mother used to read me  a story called Epaminondas by Sara Cone Bryant (copyright 1938).  I remember loving the story about this boy “who didn’t have the sense he was born with.” I didn’t remember that the boy was black  I only remembered that he did foolish things that make me laugh..

Actually, this tale had a long oral tradition often known as the noodlehead tale. A noodlehead is a person who brain is filled with noodles instead of brains.

Epossumondas is a dutiful obedient possum with no common sense.  When his mother tells him to be careful how he steps in her pies, he slowly and deliberately steps right in the middle of every single one.

I love how Colleen Salley and Janet Stevens redeemed this tale by portraying the character as a possum.  The second graders at Sara Collins Elementary School howled with laughter at this picture of  a possum wearing a diaper.   They wanted to know how about the safety pins.

Epossumondas’s human mother and aunt are modelled on author Colleen Salley, a resident of the French Quarter in New Orleans  also known as Queen Colleen, a popular Mardi Gras figure.  She has written three other books about Epossumondas, all based on Southern folktales. 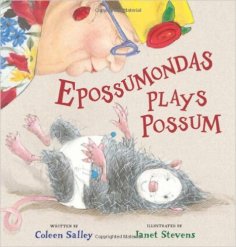