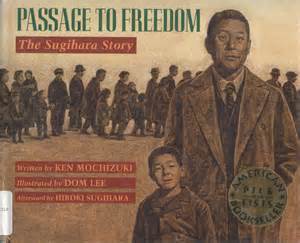 Hiroki Sugihara was a young Japanese boy growing up in Poland in 1940.  His father was a Japanese diplomat.

One morning, he awoke to find hundreds of people crowded around the gates in front of his house.  All were Jews, all of them in great danger.  They wanted his father to write visas so they could leave the country safely.

The Japanese Government refused to allow his father to write the Visas.  He heard his father say to his mother, “I have to do something.  I may have to disobey my government but if I don’t I will be disobeying God.”

When he consulted his family, even his young son agreed that they must help these people escape Poland.  By writing these visas, his father helped almost a thousand Jews escape Poland

The Sugihara family were also forced to leave Poland and spend eighteen months in an internment camp in Soviet Russia.

.In the 1960s, the family began hearing from the “Sugihara Survivors,” Jewish people who had escaped almost certain death because of these Visas.  Chiune Sugihara was awarded the “Righteous Among Nations” Award.

This is an inspiring story about a very dark period of history.   This could be an excellent resource to use with elementary students with its focus on a hero rather than the atrocities.